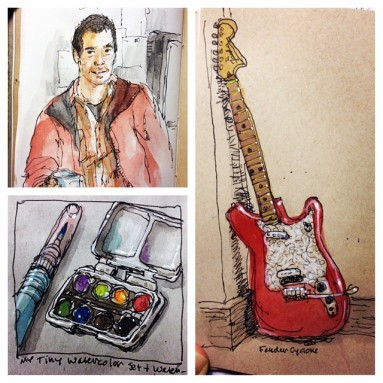 We live with these two guys. In the first sketch I think I waited too long in the day to sketch Clyde – he was getting tired and wanted to “park” himself in his home for the night (the sketch below it). I was trying to draw him (in sketch one) and he was advancing on me, so I kept backing up and drawing, backing up and drawing — that’s why it’s a little rougher than the others. His sleeping accommodation is the top half of a large plastic dog crate; I’ve had to cut the door larger and larger as he’s grown so he can get in and out of it. The last drawing is of Truffles, my daughter Lily’s Russian red tortoise. He’s a fraction of the size of Clyde, and only weighs a couple pounds, whereas Clyde weighs about 100 pounds!

On a side note, I drew all three of these sketches with a Pilot Varsity $2 disposable fountain pen, which I’ve learned to refill with high-quality, waterproof Noodler’s Black ink thanks to this video that showed me how! It’s a great pen and doesn’t deserve to be thrown away 🙂